This year we were delighted to support the Perth & Kinross Countryside Trust (PKCT) with the proceeds from our 2017 wall calendar, and for a very good reason... They look after the things that we hammock campers couldn’t really do without: Trees!

...And on 2017's International Day of Forests, we think our trees deserve some extra love.

Founded in 1997, the PKCT is based in Scotland, dividing time between Perth and the Royal Botanic Gardens in Edinburgh. It’s an independent charity that negotiates access to land, builds footpaths, helps care for Scotland’s most spectacular woodlands and trees, and works on conservation projects. This busy team of just 5 (5!) specialists work hard to improve and promote access to the countryside for walkers, cyclists, horse riders - not to mention wild campers! 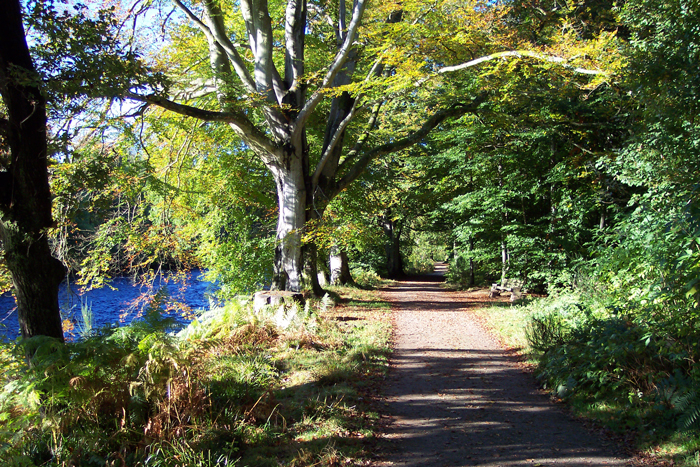 Last month we had the privilege of being taken on a private tour through Edinburgh’s Botanic Gardens to see how PKCT protected endangered conifers. The tour was led by PKCT’s Trust Manager, Morag, and the Conifer Conservation Programme Officer, Tom. Not only did we gain a fantastic insight into the painstaking work done by the trust and why they love wild campers, but we also got an idea of how tree conservation impacts our whole world. 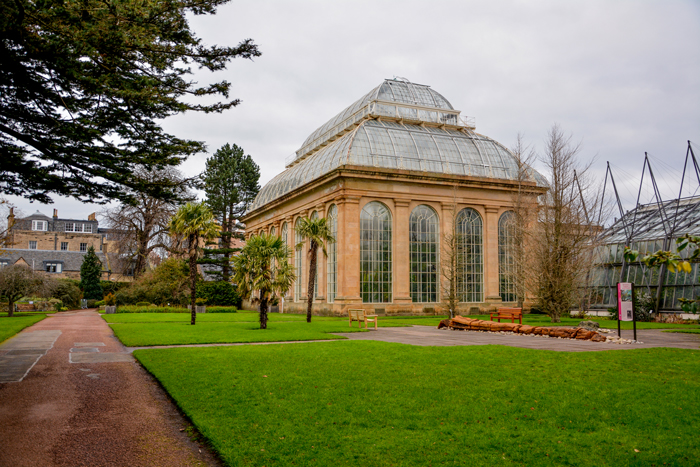 Perthshire Big Tree Country is the name of the conservation project that PKCT are working on: it refers to some 200,000 acres of spectacular woodland sites in central Scotland. The PKCT works with communities and the government to help make it all accessible for everyone to enjoy. 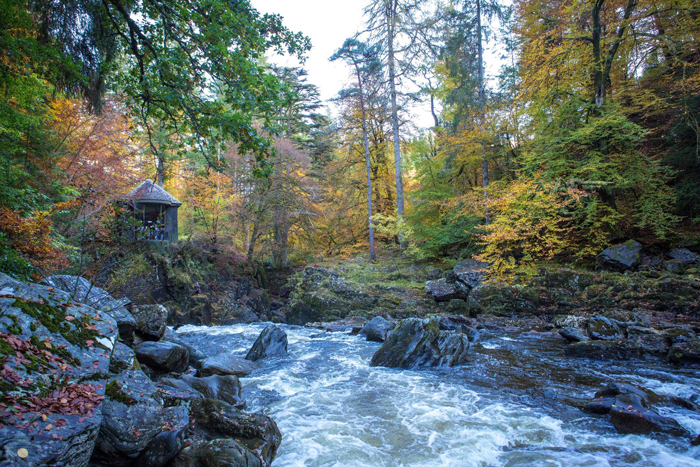 The Hermitage (Photo courtesy of PKCT)

The Trust also oversees a huge collection of conifers in the Botanic Gardens, carefully tended by Tom. What we learned is that conservation isn’t a simple business! Any plantations have to go through rigorous legal & permissions processes, risk assessments, and licensing before they are planted - then once the permission’s granted… But that’s not the end of it: the team have to see if the trees actually grow! 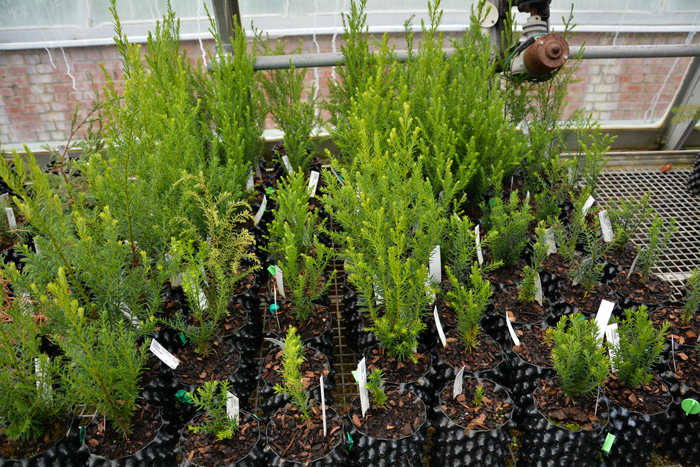 That hasn’t stopped them though: Around 2,000 new trees are to be planted by the Trust by 2018, which can only be good news to us. If it weren’t for the efforts of conservationists like those at the Trust, many of the species of conifer we find here (and indeed around the globe) would be extinct. It involves travelling to a host of different countries, taking samples and bringing them back to Scotland for plantation.

Here are a few of the conifers we saw sitting in the glasshouses, patiently awaiting the day they meet the soils of Perthshire! 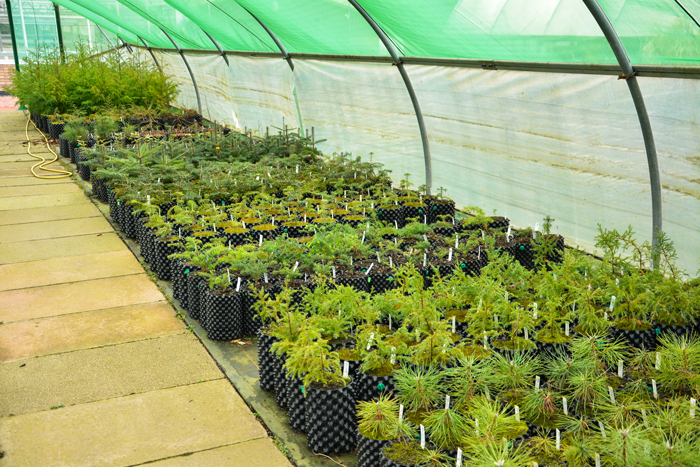 What’s the PKCT working on at the moment?

It isn’t just the science of conservation the PKCT’s agenda. They are responsible for maintaining and opening up some of our most beautiful footpaths, woodlands and trails - which ultimately drives much-valued tourism to the local area. They’ve even helped make some of them accessible by wheelchair. Currently, they’re helping to carve a long-distance walking route along the length of the river Tay… We know we’ll be there to try it out when it’s finished! 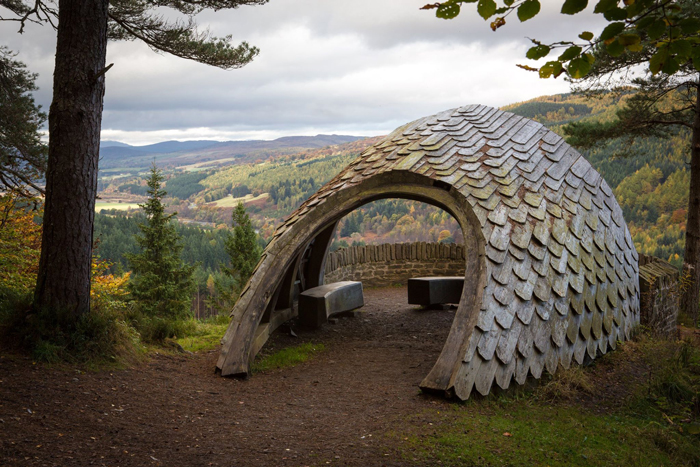 They also care for some of Scotland’s rarest and oldest tree specimens. It’s probably not widely known that Dunkeld, a village in Perthshire, was home to the 3rd tallest tree in Britain. Tragically, the ‘Hermitage Douglas’ Fir was blown over by strong winds last winter (crashing into its own interpretation board, ironically)... But the PKCT have a great send-off planned for it; they want to work with architects and designers to turn this ancient timber into something special (furniture? A sculpture? Watch this space!)

We were excited to know from Morag that DD tarps were a favourite amongst the team in their conservation work - She even has 20 tarps of her own! They are also used frequently for the wild-camping activities offered by another organisation she runs, called The Natural Change (which guides businesses who want to make a positive impact on the environment).

On that topic, we were interested to know from Morag whether the PKCT ran into any challenges from wild campers! Wild camping in Scotland is free and legal, though recent legislation has been made to restrict this activity in the Loch Lomond area, mostly due to littering and antisocial behaviour. So it must be an issue. The PKCT offer some advice for protecting woodlands and preventing the spread of harmful tree diseases.

(...Remember, you can be kind to trees while hammock camping by using our aptly-named Tree Huggers in your suspension system! They're bark-friendly!)

Still, Morag insisted that wild camping should absolutely be encouraged - after all, it’s just about the best way to connect with nature, to discover peace and enjoy the areas the PKCT are trying so hard to promote. Plus, it’s a form of eco-friendly tourism.

In fact, we - like the Trust - feel Perthshire is an oft-overlooked part of Scotland for trekkers. Most prefer the rugged moorlands and glacial crags of the Highlands, where they might meet bigger challenges and tougher routes. But Big Tree Country is something different. It may not be steep and dramatic, but it has a very distinctive charm, and boasts some of the most magical woodlands in the country with some truly impressive tree specimens! What’s more - its picturesque trails are not just great for experienced hikers, but also for beginners, geo-cachers, families and people with limited mobility, too. That, we think, is even more reason to love Big Tree Country… After all, shouldn’t the great outdoors be for everyone to enjoy? 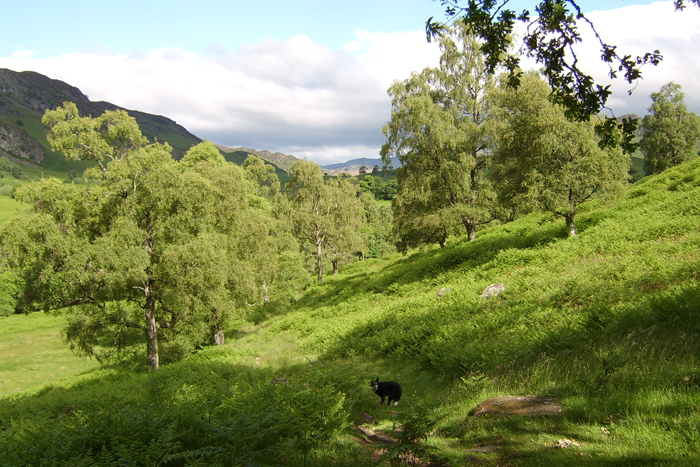 We want to give a heartfelt thanks to the Perth & Kinross Countryside Trust and the Royal Botanic Gardens for taking us behind the scenes.

Please donate to the PKCT to help them continue their amazing work. 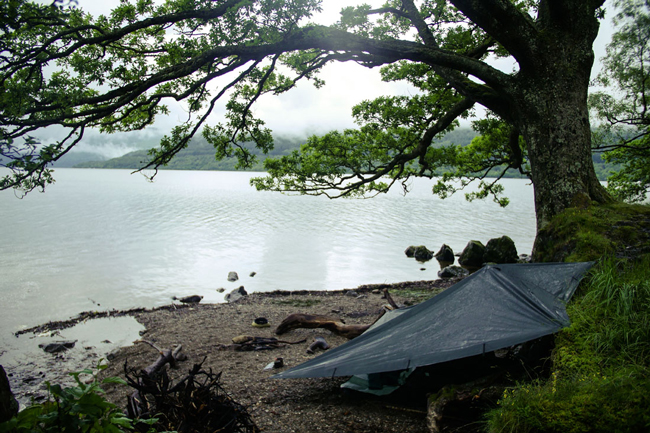 Camping guide: Scotland
Why we love hammocking in the land of pines and peaks
< Previous post
Scouting for Hammocks!
Next post >
Guest Blog: 7 Reasons to Bring a Tarp

200 Miles for Charity with @EastAnglianBushcraft

For the first Adventure Blog of the new year, we're catching up with DD Camper and outdoorsman, Craig W., also known to many as @EastAnglianBushcraft! With a passion for the outdoors as well as a deep desire to pay kindness forward, Craig tells us about a 200 mile charity hike that he completed for Veterans At Ease in the chilly winter months of 2022 - as well as letting us in on a few exciting plans for trips throughout the year.
Read more